October 12, 2010
While many diabetic people will opt for a water melon as a way to supplement their diet with healthy foods, I would suggest a plate of ugali because of its relatively low glycemic index (GI).

Much of our problem with food arises from the fact that many of us are arrogant about how different foods affect our body. One thing that will go a long way towards helping you to eat better and healthier is a simple understanding of what nutritionists call the Glycemic Index.

Our carbohydrate intake is largely based on grains.

Typically, every meal is likely to contain one grain or another, starting the day with a bowl of cereal or amaranth porridge or a slice of toast for breakfast, to our staple maize and beans. A more European serving of pasta for a quick meal on the go is also based on grains.

Everything, from fruits to rice, contains some level of glucose. Glucose is some kind of sugar found in carbohydrate family, and it is the absorption of this that causes our blood sugar to rise leading to a string of events related to Diabetes.

In terms of weight control, ugali have a low glycemic index, which is a measure of how quickly starch in converted to glucose, the energy 'fuel' of the body.

The foods that are absorbed faster are also used up faster, which means your eating of  (e.g. a few slices of white bread) will cause you to become hungry sooner (after, 2 hours) than if you ate millet (brown) ugali that gets absorbed slowly.

In addition, this slower breakdown of starch to glucose, as opposed to rapid peaks and drops of circulating blood glucose, is attributed to a slower release of insulin. This suggests that consumption of low gluten chapattis and mandazis prevents insulin resistance, which is how Type 2 Diabetes arises. To learn how to prepare low gluten chapattis and mandazis click How to Prepare Healthy African Snacks

Surprisingly, foods may not appear exactly as you expect in the Glycemic Index, For example, a water melon is fairly high up the index while ugali is moderate! This is because fruit is packed with glucose in order to make it more appealing to seed dispersal agents like animals, humans and birds, while low gluten foods such as whole grains (e.g. millet ugali) are actually low on the index.

In short, you should aim to limit your intake of processed foods and you are more likely to stay within the lower reaches of GI.

For more on pictorial preparation of low gluten chapattis and mandazi (made from sweet potato, pumpkins and wheat flour) please click here. 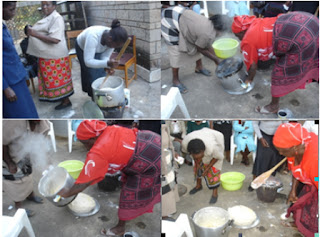 Popular posts from this blog

How to Verify Your Land Title Deed is Genuine

May 31, 2012
Cases of forged title deeds are on the increase. Therefore, people are losing money to con men as they are taken advantage of due to their ignorance regarding land transaction matters. While thinking of owning land, it is vital to be aware of how you can verify a title deed before investing your hard earned cash.

As you plan to commit your money to buy and construct your dream home, verify that, the seller is the genuine owner, the land exists and is free from restrictions. Also be sure that you are not buying land on a road or railway reserve and above all, that the title deed is genuine.

Herbal Plants used for Alternative Medicine with no side effect

February 07, 2011
In a sad note, most indigenous informants keep herbal knowledge, especially the actual preparation methods, strictly secret. Luckily, an aged medicine man from Gatundu in Central Kenya, whose great knowledge of medicinal plants facilitated the write-up of this article.
In part one of this article, plants are grouped according to their medicinal use. According to the aged medicine man, simply boil the leaves, roots or the bark; add honey or milk or soup to sweeten the concoction. He recommends taking a glass in the morning and in the evening for preventive measures.
He cautions on their medicinal uses which should be considered as neither preparation methods nor dosage prescription are provided. This is a topic that would require much more time and I have decided to leave it for part two of this article.
Best Herbal Plants for alternative Medicine with no side effects

I have grouped their medicinal uses in three parts which are,       Alternative medicine for preventive measuresHerbal …
5 comments
Read More »

How farmers can double their bean yield production

September 16, 2010
"As Jack slept, the beans germinated in the soil, and by morning a big beanstalk grew in their place. When Jack saw the great beanstalk, he immediately decided to climb..." This is a classic scenario of 'Jack and the Beanstalk' fairy tale. The same is true for Kenya's bean variety that climbs and spreads on sticks producing double the yield of local varieties.

Due to subdivision of land in Kenya, farmers are not able to produce enough beans to feed the 38.6 million people living in Kenya.This is mainly due to shrinking land sizes. This is the reason why high yielding varieties of beans that only need a small area to grow has been developed. These new varieties of beans require support with stakes (sticks) to climb on when they are growing.


The beans can grow up to a height of 3.5 meters. The long stems of this variety of beans enable it to produce more pods as compared to the normal bean varieties (bush bean).   With good management climbing beans can produce u…
5 comments
Read More »